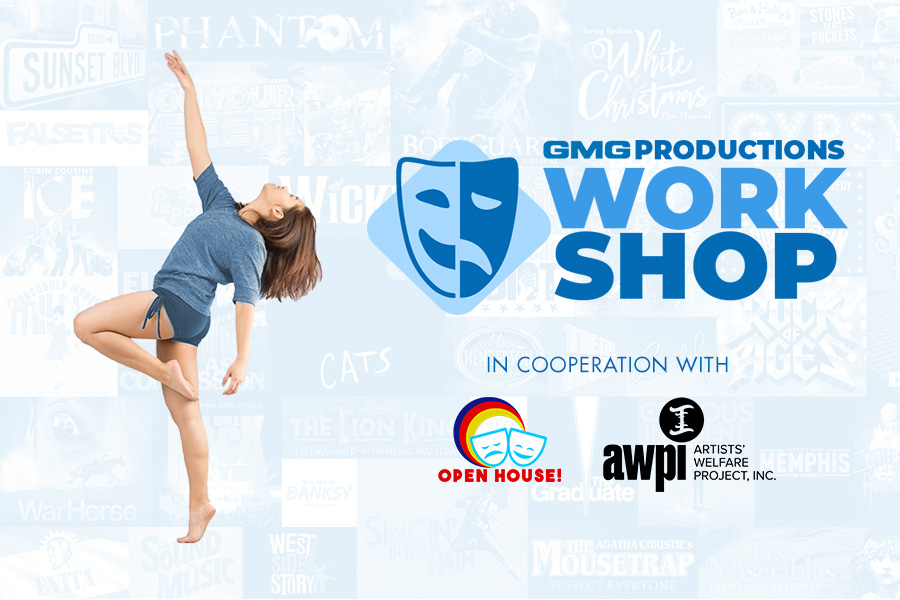 MANILA, PHILIPPINES – GMG Productions is partnering with the Open House Fundraiser and the Artists’ Welfare Project, Inc. for their newly launched Workshop Series. Through its large network of shows and the magic of the internet, GMG are able to bring a piece of these international shows into peoples’ homes. A portion of the workshops’ proceeds will go to Open House as well as five workshop scholarships per week that shall be extended to qualified beneficiaries as part of additional revenue-generating measures for the Open House Fundraiser.

“We are excited to partner with the Open House Fundraiser and AWPI”, shares GMG Productions’ CEO Carlos Candal. “At the beginning of our discussions for the workshops, we knew right away that it was the right thing to do. With every show that comes in to Manila, we hire a team of up to forty amazing Filipino musicians, cast and crew members, many of whom have been displaced due to the pandemic. We want to be able to help by making use of our network”.

“Open House, whose members took a hard blow from show cancellations last March 2020, didn’t think twice and wasted no time to come together, even coming from different performing arts backgrounds, to take their talents online and raise funds, in order to support our fellow workers who were economically affected by the lockdowns. Though shows got cancelled, our Bayanihan spirit rose to the occasion and persevered,” shares Jennifer Bonto, head of Artists’ Welfare Project, Inc and one of the lead organizers of the Open House Fundraiser

Open House was an online fundraiser that ran from March to May, 2020 to raise funds for displaced workers in the performing arts community. This initiative was a creative collaboration between Artists Welfare Project Inc, Philstage, SPIT, Third World Improv, Theater Actors Guild, and Ticket2Me.

GMG’s first workshop series will launch June 7th. The dance workshops will be held Mondays, Wednesdays and Fridays at 3 PM. Each session will be approximately 1 hour and will include learning choreography, cast hangout and Q&A.

Follow GMG Productions on Social Media for the latest announcements and updates on the upcoming workshop series and other ways to donate to the Open House Fundraiser
Facebook: https://www.facebook.com/GMG.Productions
Instagram: https://www.instagram.com/gmg.productions/
Twitter: https://twitter.com/gmgprods
For more information email info@gmg-productions.com

ABOUT PHILSTAGE
Founded in 1997, the Philippine Legitimate Stage Artists Group or PHILSTAGE is the alliance of sixteen professional companies in the theatrical arts.

ABOUT AWPI
One of the resolutions in the consultation done among artist-leaders who attended the Ikatlong Tagpo: 3rd National Theater Festival held at the Cultural Center of the Philippines (CCP) in 2004 was to address the welfare needs of the artists, especially those who, since the Martial law Days, have unselfishly dedicated their lives to arts and cultural work, and have contributed immensely to the toppling of the dictator and to liberating the Filipino people from an oppressive administration. Many of these artists and cultural workers are now in their senior years, with many of them not prepared for old age, when they have already become sickly, with no savings, no house of their own, no social security benefits, no retirement benefits.

In the succeeding years, 2005-2007, it became almost a regular occurrence that the members of the artistic community would be informed that a colleague has a debilitating disease, cancer, diabetes, hypertension, aneurysm, heart enlargement, blocked arteries, or that another artist passed away leaving huge hospital bills and with no funds for burial. The artistic community, being generally, a compassionate, caring community, would “pass the hat” to collect donations. After a series of fund collection and fund raising for the sick, the dying and the dead, a group of concerned artists decided to form the ARTISTS WELFARE PROJECT INC (AWPI) in 2007. Its main reason for being is precisely to spearhead a campaign and implement programs to address the welfare needs of the old members of the artistic community, while also teaching and preparing the younger members of the artists’ sector to take care of their present and future needs.

Quote: “AWPI continues to champion artists’ right and welfare. We will get through this pandemic, by being Accessible, Willing to serve, Proactive and Inclusive.”