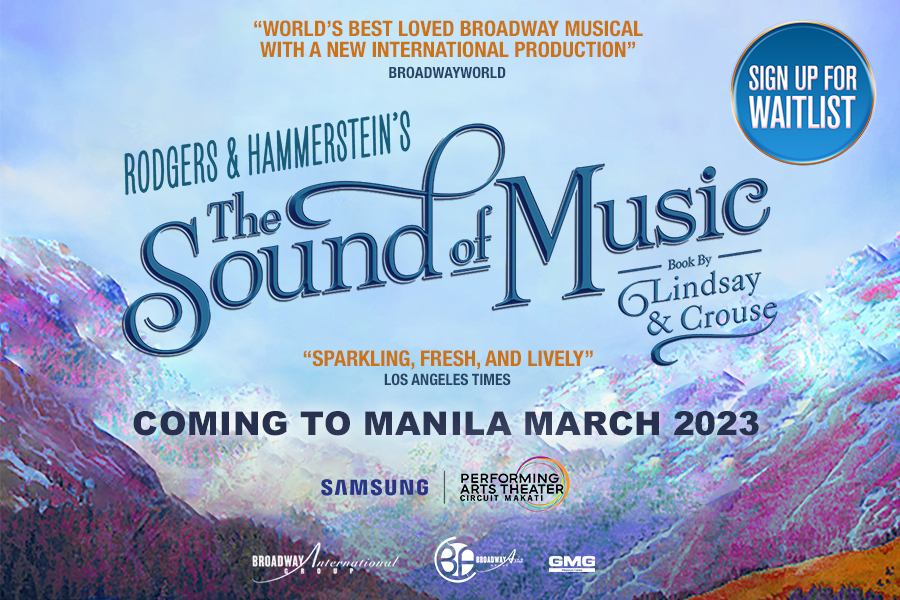 Suggested by The Trapp Family Singers by Maria Augusta Trapp

Broadway International Group launched a multi-year international tour of Rodgers & Hammerstein’s THE SOUND OF MUSIC in Singapore this Fall. This lavish and popular production of one of the world’s most beloved musicals of all time continues with multi-week stops throughout The Philippines, India, Malaysia, China, Hong Kong and Taiwan, with other additional countries to be announced.

“It is a great privilege to bring this cherished Rodgers & Hammerstein musical to Manila, particularly at this time of global recovery. Our goal is to celebrate the spirit of musicals and sing ‘Do-Re-Mi’ with audiences everywhere! We are thrilled to light the Broadway musical torch once again in Manila, and to perform this fantastic production in The Philippines.” Simone Genatt and Marc Routh, Co-Founders and Producers of Broadway International Group said in a joint statement. Genatt and Routh have worked on many international productions in Manila including CINDERELLA starring Lea Salonga. The Broadway partners have produced and presented THE SOUND OF MUSIC for nearly thirty years as part of Broadway Asia Company, a production, management and distribution entity focused on the Asia Pacific region, having done musicals and other live attractions and immersive entertainment in over 400 cities in the world market.

One of the most popular Broadway musicals in the international marketplace, THE SOUND OF MUSIC is celebrating its 65th birthday in 2024, having won five Tony Awards, including Best Musical, and the GRAMMY Award for Best Show Album, for its original run. It has since entertained generations of audiences in live productions

across the world, as has the classic film starring Julie Andrews and Christopher Plummer, which won five Oscar Awards, including Best Picture.

Broadway International Group and Broadway Asia Company are among the largest production, management, and distribution companies of live entertainment throughout the global markets with focus in New York, London, Europe and Asia. Its founders, Simone Genatt and Marc Routh, are two of the most active commercial Broadway and West End producers. Over the last 25 years, theatrical productions by the Broadway International Group partners have performed in over 60 countries and garnered over 56 Tony, Olivier, Grammy Awards and many other global theatrical accolades through its many collaborations. Select live entertainment productions and attractions include: An American in Paris, The Sound of Music, Back to the Future, The Producers, Hairspray, Anastasia, Amelie, Legally Blonde, The Great Comet, Stomp, COOKIN/NANTA, Shear Madness, The Addams Family, Nice Work If You Can Get It, The King and I, Cinderella, West Side Story, 42nd Street, Rock of Ages, Immersive Great Gatsby, Immersive Doctor Who, Neverland, the Peter Pan

Immersive, Murder Ballad, Tape Face, I Love You, You’re Perfect, Now Change, Little Shop of Horrors, Jay Chou’s THE SECRET, Manual Cinema, ICE AGE LIVE: A Mammoth Adventure, SpongeBob SquarePants Live, Creature from the Black Lagoon, Madagascar Live, Fuerzabruta and many more. Select forthcoming productions and attractions include: Immersive Great Gatsby in New York at the Gatsby Mansion and multiple Asian territories, Anastasia and Beetlejuice in Japan, Marilyn Monroe Hollywood Experience: The Global Tour, and Journey, an immersive technology dining attraction in New York. Broadway Asia, co-founded by Simone and Marc, is a pioneer and a leader in the field of international licensing and touring with shows and attractions in over 400 cities across 5 continents.

Jack O’Brien has won three Tony Awards for his direction of Hairspray, Henry IV, and The Coast of Utopia. His other recent Broadway credits include Arthur Miller’s All My Sons, Carousel, The Front Page, Charlie and the Chocolate Factory, It’s Only a Play, Macbeth, The Nance, Dead Accounts, Catch Me If You Can, Impressionism, Dirty Rotten Scoundrels (Tony nom.), Imaginary Friends, The Invention of Love (Tony nomination and Drama Desk winner),The Full Monty (Tony nom.), More to Love, Getting Away with Murder, The Little Foxes, Damn Yankees, Two Shakespearean Actors (Tony nom.) and Porgy and Bess (Tony nom.).Off- Broadway credits include Tom Stoppard’s The Hard Problem, Pride’s Crossing, and Hapgood (Lucille Lortel Award). Other productions include Il Trittico at the Metropolitan Opera, Guys and Dolls at Carnegie Hall, Much Ado About Nothing for The Public’s Shakespeare in the Park, Love Never Dies and Hairspray (Olivier nom.) in London, which saw a revival at the Coliseum in London last summer. Mr. O’Brien was the Artistic Director of the Old Globe Theatre from 1981 till 2007. He has directed six programs for PBS’s American Playhouse. His book, Jack Be Nimble, is published by Farrar, Strauss and Giroux and his next volume, Jack in the Box: or, How to Goddamn Direct, will also be published by FSG. www.broadwayasia.com.

After long and highly distinguished careers with other collaborators, Richard Rodgers (Composer, 1902-79) and Oscar Hammerstein II (Librettist/Lyricist, 1895-1960) joined forces in 1943 to create the most successful partnership in American Musical Theatre. Prior to joining forces, Rodgers collaborated with lyricist Lorenz Hart on musical comedies that epitomized wit and sophistication (Pal Joey, On Your Toes, Babes In Arms, and more), while Hammerstein brought new life to operetta and created the classic Show Boat with Jerome Kern. Oklahoma!, the first Rodgers & Hammerstein musical, introduced an integrated form that became known as “the musical play.” Their shows that followed included Carousel, South Pacific, The King and I, and The Sound of Music. Collectively, the Rodgers & Hammerstein musicals have earned Tony, Oscar, Grammy, Emmy, Pulitzer,

and Olivier Awards. The Rodgers & Hammerstein Organization is a Concord Company, www.concord.com.

GMG Productions have its headquarters in Manila servicing the Asia Pacific region, as well as regional bases in New Zealand, Singapore and the UK. Having strong existing relationships with some of the world’s most acclaimed Producers, GMGP is dedicated to bringing prestigious productions to the region. The GMGP founders and management team comprise some of the entertainment industry’s elite who are also supported by a strong in-house team with a wealth of experience in production, marketing and design to enable GMGP to service every aspect needed to present shows in the Asia Pacific. Over the past decade, the GMGP team has been involved in producing numerous shows from Queen’s We Will Rock You, CATS, RSC’s Matilda in Manila, Disney’s The Lion King, Les Misérables, MAMMA MIA! And WICKED, The Sound of Music, West Side Story and The Curious Incident of the Dog in the Night-Time. www.gmg-productions.com.